Rollerdeck Associates | Relationships to Impact > News > News > Off to a Good Start: A framework for the dialogue between state and businesses 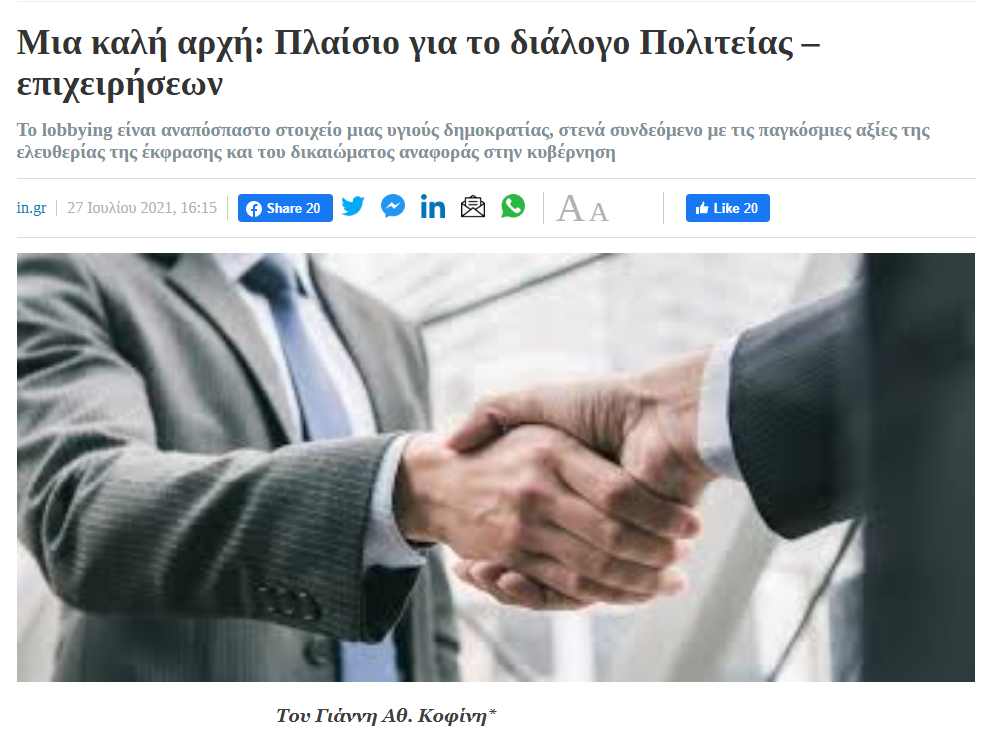 Off to a Good Start: A framework for the dialogue between state and businesses

“Lobbying is an integral part of a healthy democracy, closely linked to the universal values ​​of freedom of expression and the right to report to government”

While the wounds of the pandemic are still open, sustainable development returns as the fundamental objective.  Pretty reasonable as the Greek society now feels the absolute need to improve its standard of living and put its trust in the future, following a decade-long economic crisis along with the multi-level consequences of lockdowns. Undoubtedly, the resources of the Recovery and Resilience Facility provide the ultimate opportunity to achieve this goal.

In times of crisis, success requires synergies and effective management. The Anglo-Saxon distinction between “politics” and “policy” is extremely useful, as what is needed today is not the traditional “political game”, but bold and substantial policies which can in turn yield tangible and measurable results. Policies, however, that require deep knowledge of the market, dialogue and creative osmosis between experiences and ideas.

Onthe one hand, public administration alone cannot answer the big questions of our times. The Greek government is rightly channeling significant resources of its “GREECE 2.0” Plan to strengthen its infrastructure. But this is not enough. Despite some positive exceptions, public administration is characterized by the absence of a culture of “taking initiatives”, as a result of decades of political party interference in its operation. At the same time, scandals of political controversy discourage capable executives from taking on public roles and responsibilities.

On the other hand, companies that have been acting defensively for years, operating in an environment that demonized entrepreneurship, are only now beginning to realize that they have a leading role to play in shaping Greece’s next day and that they also have major responsibilities apart from their rights. They are just starting to recognize that, for example, even raising awareness for issues such as the protection of the environment, sustainability, gender equality in employment etc. is not solely the responsibility of the state, but also their own.

Thus, institutionalizing the dialogue between the state and businesses is an absolute priority and necessity. The relevant legislative initiative put out for public consultation by the Ministry of Interior does exactly this, setting the framework for lobbying in Greece.

In search of solutions

While citizens demand immediate solutions to today’s challenges, we can no longer afford to characterize the transparent and regulated dialogue between state authorities and the business world to be a priori characterized as corruption. Nor should the calendars proving meetings between politicians and business leaders make the headlines and fuel political party feuds.

The recent legislative initiative of the Ministry of Interior makes a start. It will certainly take further steps in order to recognize that the role of the lobbyist – despite the prejudices and “urban myths” that follow this activity – is to actively seek a common ground between the agenda priorities of politicians, legitimate business interests and the needs of society.  To enrich the decision-making process by transferring data, experience and knowledge to the public administration and regularly “translate” the language of politicians to business leaders and vice versa, hence easing mutual reserve.

Ultimately, as pointed out by Transparency International, lobbying is an integral part of a healthy democracy, closely linked to the universal values ​​of freedom of expression and the right to report to government.

USA and the EU have shown the way. It’s time for us to make up for the time lost.